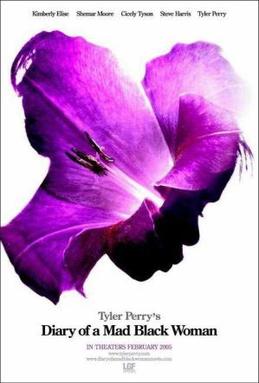 Diary of a Mad Black Woman

Few movies are made with the personal fervor of Diary of a Mad Black Woman. When Helen (Kimberly Elise, Beloved) is literally thrown out of her house by her callous lawyer husband (Steve Harris), her sense of self unravels. She finds herself on the doorstep of her gun-toting grandmother Madea (cross-dressed Tyler Perry), who sets Helen on the road to dignity and forgiveness--with a few detours along the way. The plot of Diary of a Mad Black Woman unfolds in a dizzying melange of styles, from soap opera to campy comedy to chick-flick romance to gothic revenge to inspirational tale of redemption. Perry, like Eddie Murphy in The Nutty Professor, plays multiple roles in a family, two of which are over-the-top scenery-chewers while the other is a sincere, generous family man with a drug-addicted wife. This everything-including-the-kitchen-sink approach reflects the play's origins; Perry adapted the screenplay from his enormously popular gospel play, a genre of melodrama featuring extreme emotional drama and whiplash inducing plot turns. Some viewers will clutch this movie to their breast as a cinematic feast; others will see it as so schizophrenic it borders on the surreal. But either way, Elise's charismatic performance will keep you engaged throughout. Also featuring Cicely Tyson (Sounder), Shemar Moore (The Brothers), and Judge Mablean Ephriam (Divorce Court). --Bret Fetzer

Orlando:
Why you being so mean, woman?

Helen:
Why you being so nice, man?

Charles:
Even though I almost destroyed it, I know you still have a heart.

Judge Ephriam:
What is this? Repeat offender day?

Orlando:
Helen, if I'm away from you for more than an hour, I can't stop thinking about you. I carry you in my spirit. I pray for you more than I pray for myself.

Share your thoughts on Diary of a Mad Black Woman's quotes with the community:

Use the citation below to add this movie page to your bibliography:

Know another quote from Diary of a Mad Black Woman?

Don't let people miss on a great quote from the "Diary of a Mad Black Woman" movie - add it here!

Diary of a Mad Black Woman

Our awesome collection of